Fishing not only affects the numbers of fish, but also their heritable characteristics through evolutionary changes. IIASA research in this area sheds light on how fish reproduce under increasing fishing pressure, which has important implications for the regulation of fisheries. 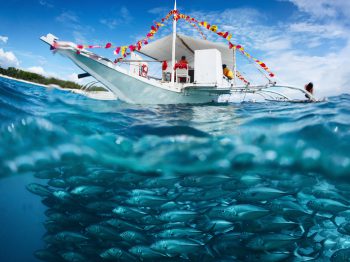 Fish populations live in an ever-changing interaction with their environment. One key aspect of this interaction is so-called compensatory mechanisms. These are processes that make populations more productive when they decline, thus facilitating their recovery, and less productive when they approach the carrying capacity of their environment, which eventually prevents further population growth.

In fisheries science, it has traditionally been assumed that the main compensatory mechanism occurs through recruitment, which is the process whereby the population grows due to the addition of juvenile fish. The compensatory mechanism takes effect when the population gets larger, causing each spawning fish to produce on average fewer surviving offspring. This assumption underlies much of the scientific advice that helps fishery managers establish sustainable fishing levels. At the same time, there is little empirical evidence of such a relationship between the abundance of spawning fish and the resulting recruitment. How can we reconcile these apparently conflicting suppositions?

Observations of individual fish can reveal more subtle changes in population characteristics occurring over longer time scales. Probabilistic maturation reaction norms, which is a method previously developed and applied at IIASA [2], have typically suggested that marine fish populations evolve a tendency to start reproduction at an earlier age in intensively exploited populations [3].

A study undertaken at Lake Erie in the US, however, shows the opposite pattern. Following a reduction in the exploitation pressure, yellow perch females started to delay their reproduction. This is a rare example of a possible evolutionary recovery towards a more pristine reproductive schedule [4]. A comparison over space rather than time of two populations of cutlass fish (a major commercial species in East Asia) further revealed that the population exposed to higher fishing pressure matured earlier than the one facing less pressure from fishing [5].